Child Killed In Crash Between SUV and Motorcycle

Last Monday, October 26, 2015, a horrifying accident between a Ford Expedition and a motorcycle took the life of a 5 year old boy in Harris County.

According to Sgt. Mike Harvey with the Harris County Sheriff’s Office, the impact of the accident sent the motorcyclist into the SUV. His helmet crushed the head of the little boy in the rear seat strapped in a child safety seat.

The crash happened in the 2900 block of E. FM 1960 at Moonshine Hill Loop Rd in Humble. The mother of the slain child was driving the SUV and had just made a left turn, crossing the path of the motorcyclist. According to the accident investigator, the motorcycle, a Suzuki GSX-R750 was traveling at a high rate of speed and the SUV driver most likely didn’t see him before impact.

Both the motorcycle rider and the critically injured child were transported by Lifeflight to Memorial Hermann Hospital where the little boy later died from his injuries. The Harris County Sheriff’s Office is continuing their investigation of this case.

History Of Tragedy At This Location

Apparently, this same stretch of road is no stranger to tragedy. The dangerous intersection has been the site of many vehicle accidents and at least 3 deaths since 2011, according to a federal database. 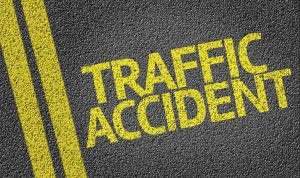 In fact, just 3 days after the fatal accident, a school bus was hit from behind by a car on the same road. The bus from Crespo Elementary School in Houston was carrying 29 students, teachers and parents on a field trip to Old MacDonald’s Farm. The car hit the bus on the right side throwing the passengers to the floor. All of the children along with 5 of the adults were sent to area hospitals where they were treated and released.

All accidents are documented and shared with TxDOT so they can analyze the data with the goal of making our roads safer. One can hope that they are carefully reviewing all the serious accidents that have occurred along this stretch of FM1960. Some witnesses of Monday’s accidents have expressed that they feel a traffic light may have saved the child’s life. That perhaps, if the motorcyclist had somehow been made to slow down, the accident would have been prevented or at least, he may have hit the car with less impact.

Another note we might take from the latest accident involving the school bus is this: could most of the injuries suffered by those students have been prevented if they were wearing safety belts? We had discussed the school bus and seat belt issue in an earlier post. This is not an easy judgement to make as there are pros and cons to consider but we do hope that the authorities are carefully evaluating this issue.

The bottom line is this week on the same stretch of dangerous road, too many precious young lives were impacted. 29 students were injured and traumatized and one young boy was killed.There must be a solution to put a stop to the serious accidents in this area.

Easy Help For Your Car Or Motorcycle Accident

The law firm of D. Miller & Associates has years of experience and success helping victims of car and motorcycle accidents. You do not need to be alone during this time of confusion, pain and financial difficulty. Contact us immediately after your crash for your free consultation with a Houston personal injury law firm.